Life on the Block

What to do with the kitchen scraps? 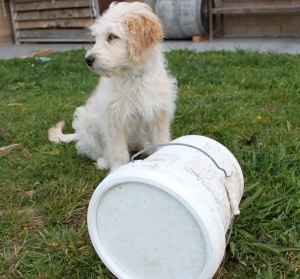 We have a worm farm, chickens and a dog so we don’t have much kitchen waste that needs composting but we still end up with stuff that needs dealing with (mostly onions, citrus etc that they don’t eat) – just plonking these bits in the compost bin doesn’t seem to be doing anything.  I’ve been digging them into the garden as I create beds and I’ve tried an in-bed composter (I’ve yet to blog about this attempt: fail – mostly due to a rat in the garden) so what do I do when I’m not digging new garden beds?   To get it composting well a tumbling system is meant to be best. There are some great looking ones you can buy but of course hubby would never let me buy something he could make himself.  However his list is long, which led me to this version which didn’t involve me needing to get out the skillsaw and make some sort of frame.

Drill some holes all over the sides.  You could do this randomly or in a pattern – it doesn’t really matter.  I used a 4.5mm bit size – I didn’t want the holes too big so that stuff fell out.

I sat the bucket by the backdoor and filled it with kitchen scraps that no-one would eat;  coffee grounds, used straw (and manure) from the chicken coop, some paper and some garden weeds until it was full.  Ideally I should have layered the things but I figured the tumbling would take care of that (update – with a full bin it doesn’t mix up on tumbling so next time I should mix it up more before fitting the lid).  I don’t think I have my brown to green ratio right either – I should have more brown (leaves would be great) but we just don’t have any.  Hopefully that won’t be crucial in this test scenario.

Once full I put the lid on and made sure it was absolutely secured.

The next step was to tumble it several times a day.  My idea was to put it in the dog’s fenced in area and get him to take an interest and push it around.  As the photo shows, there hasn’t been much enthusiasm on his part.  However, because it’s lying where I see it I can give it a kick every time I’m near it.

Maybe your dog would be more obliging or you could get the kids to use it as a ball.  Anywhere you go past it at least once a day eg the washing line could work.

It should take a few weeks before I’ve got a bucket of beautiful compost.  I’ll update on the result.  Meanwhile I need to make another bucket or two to deal to the rest of the scraps.

Growing | Life on the Block

Growing | Life on the Block

Animals | Is it a thing? | Life on the Block

How much do our home grown eggs cost?

Life on the Block | Recipes