Earlier I posted some pics of the garden beds I’ve been making but I thought I’d update on the progress of the plants themselves.  This year I’ve tried a number of plants I haven’t grown before.  Some I’ve never eaten before! Yacon, caigua and multiplying onions are some of them.

The yacon plants look healthy, have grown easily with no trouble from insects but aren’t ready for harvest yet so I’ve no idea if they’ve grown successfully.  (I should harvest before the first frosts hit in autumn). I haven’t eaten yacon before so I don’t know if it’s even worth growing yet.  It’s a South American tuber which can be eaten raw and the taste seems to be a cross between water chestnut, pear and apple from what I read.  Anyway – I’ll update on yacon when I’ve dug it up and tried it.  The yacon (and yams in the photo) I bought online from Koanga which arrived as two large tubers which were slightly sprouting already.  I broke them into four pieces with a good sprout each and planted them out in September.

I bought multiplying onion bulbs off trade me as I loved the sound of them.  I’ve been growing red and brown onions for a few years with mixed success.  In trying to grow all our own food onions is high on my list to grow as we eat alot of them and knowing they haven’t got pesticides on them is a big motivator for me.  Onions are quite fiddly to grow from seed and transplant and then are in the ground for a long time.  Because we have such problems with birds digging up seedlings I’m loathe to put seed directly down (even though my red onion instructions tell me that’s what I should be doing).  My latest lot of onions has sat and looked like spring onions for most of their life so I’ve been thinking I’ve wasted a few months on them. (In the last few weeks they have been bulking up so all my not be lost).  Regardless of whether they turn out to be onions or not – all this time spent on growing onions has apparently been in vain as I should have been growing multiplying onions!  Plant a bulb which will… multiply.  I planted the 14 or so bulbs I bought in October and they’ve just grown and multiplied with no issues.  I planted them in a tub (an old sink) so I do need to water them more than I would if they were in a proper garden bed.   Unlike something like lettuce they are forgiving if they don’t get water every day though.  There’s been absolutely no insects or disease troubling them.  They’ve flowered (see photo) but that doesn’t seem to have affected their production. 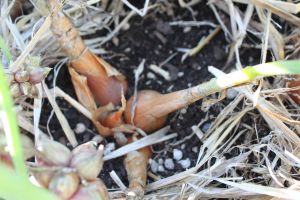 I’ve been eating the onions by picking some good looking bulbs off the side of the bunch – they’re like a pickling onion so mild in taste but onion-y. On typing this I’ve looked back at the growing instructions I got sent with the bulbs which says to harvest all the bulbs in autumn which have now grown to onion size, let them dry and eat them, saving some nice bulbs to replant.   Oops.  So I’ll do that in autumn.

The other plant I don’t know much about is caigua (said ‘kai-wa’).  Also a South American native it is cucumber like on a trailing vine.  I had 10 seeds in my Kings packet and planted 5.  Four germinated and I planted them out in September 2015.  These I planted into an old compost bin so there was a deep base of soil and it was raised away from the usual slugs and snails on the ground.  The vines grew and grew and grew.  As with the yacon and multiplying onions I’ve had no problems with disease or insects on these plants.  From my four plants I would guess I’d end up with 100 fruit.

The problem is I don’t know what to do with them.  The taste is meant to be cucumber like but it’s milder than that.  I wasn’t sure when to harvest them.  Some I picked when small (about 2cm) and used them in a stir fry like a green pepper.  Any bigger than this and the seeds inside had turned black and needed to be knifed out (they were quite hard and bitter which might have changed on cooking).  Most of the recipes I’ve read use caigua as a stuffing vegetable so I’m leaving them on the plant to get bigger and try this method.  I really hope I can make it work as an eating vegetable as the ease of growing and production per vine is great.  Meanwhile my four cucumber plants have given me one semi decent and one stunted fruit and my 5 or so zucchini plants 4 so caigua is well ahead on yield. 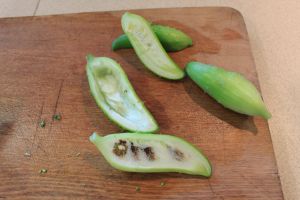 ALL POSTS | Green cleaning | Make your own

my Personal blog with tips to help you take less, give more