Sprouting grains for the chickens 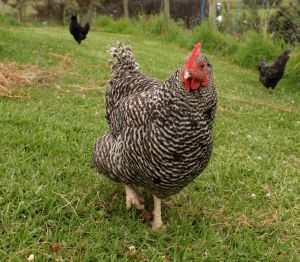 I’ve been reading lots of blogs from people who make their own chicken food.  I’d like to do the same but it seems to involve alot of ingredients and care needs to be taken to get the right amount of protein and calcium so for now they mostly eat bought pellets with a ‘treat’ portion of mixed seeds.

On the path to making our own chicken food I have started sprouting wheat to add to the meal (not home grown but maybe one day!)  Sprouting grains unlocks the nutrients so is beneficial just as it is for us eating sprouted food.   Sprouting the wheat multiplies the initial volume so is also cost effective.  I’ve seen a couple of set ups where people do this as the everyday feed and wanted to give it a try.

How I’m doing it

This current system is working quite well for our five birds.  They get about a half cupful a day along with their regular feed.  A cup of sprouts started out as maybe a third of a cup in volume. 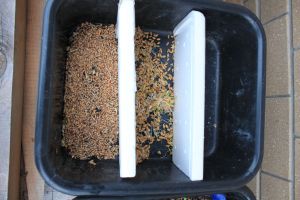 I’m using two plastic tubs I already had – the top one has holes drilled inside it and sits inside the second.  The second tub is purely to stop the water running out all over our stack of wood.  To make the tub smaller I cut some pieces of polystyrene to section it off into three compartments.  Ideally it would just be a stack of smaller tubs but I wanted to use what I had to hand rather than buy something specifically.

Every second day I put 1/3 of a cup of wheat in the divided off section and water the whole lot daily.

Once a day I feed them half from the oldest divided section.  It will be a couple of days old – just starting to sprout but not grown too long.  They get the rest of the section the next day. (In this photo the middle lot of sprouts have got too long but I’ll still give them to the girls.  They should only be just sprouted – better photo to follow!)

In theory this is a six day rotation but in reality I don’t always restock with fresh wheat every second day as planned, so they don’t end up with sprouts every day.  If the sprouted grain/seeds was the bulk of their food I’d probably be more diligent about it.

I’ve been playing with sprouting the grains for a while now and had tried various ways of getting it to work.   My factors to consider were –

To start with I used an old plastic takeaway container with holes pierced in the bottom.  It worked ok but I had it inside which is where I discovered midges and little flies were attracted to it and it was too flimsy to stack very well.  The size was good for our small flock though.  I tried sprouting the mixed food I had for them and I think the pellets in there were getting too mushy which was attracting the midges.  Just grain might work ok inside.

I next tried using some plastic bins left over from the mushroom growing days – I drilled holes in one and sat it on top of another which would catch water.  (Just to stop the water going over the stack of timber.  If it was just on the ground I wouldn’t worry about a catching container).  To start with I had it inside a plastic greenhouse but it kept getting blown over in the wind so I ended up with it by the back door along with seedlings and plants that also need watering with a piece of clear plastic sheeting over it.

This worked quite well but I had too much volume.  One cup of wheat ended up being what what they would eat in a day so they would only end up eating wheat (not an adequate diet).  Once it had sprouted too much they didn’t like it and I have read that it’s not good for them to eat the sprouts when they’re too long (now called ‘fodder’) as they can’t swallow them easily. When eating grass they peck bits off to a suitable size but these fodder bits aren’t so easily manageable supposedly.  However I could peel the whole lot off as a mat and feed it to them that way to peck at and break off bits which is what I’ll try next time it gets too long.

A neighbour had used a series of large plastic storage bins stacked up with holes drilled in the bottom.  Just the top one needed watering which poured over the rest. Birds were getting in and the wind kept blowing the stack over too but I’m sure it could work that way with a bit of adjustment.  If you had room inside it and a large flock to feed it could be successful.

The 10kg bag of wheat cost $11.50 – so economical although I’d like it to be organic.  To make a well balanced diet I’ll need to add more grains and seeds and try sprouting the whole lot.  They would have different sprouting times so I imagine it’ll take a bit of experimenting – maybe in separate containers. Chickens need protein so to make sure they get enough I should probably start breeding maggots or meal worms but I’m not sure I can go there yet.  They are getting the odd husband caught snapper frame so we’re both hoping this is a regular source of protein for us all.

ALL POSTS | Green cleaning | Make your own

my Personal blog with tips to help you take less, give more